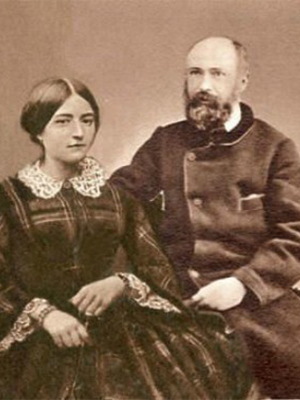 Louis Martin was born into a military family in Bordeaux in 1823. He became a watchmaker and joined a Carthusian monastery in the Swiss Alps in 1845, at the age of twenty-two. He had difficulty learning Latin, however, and eventually left the monastery and returned to his profession as a watchmaker in Alençon. In 1858, when he was 35 years old, he married the 27-year old Marie Azélie (Zélie) Guérin, who was also born into a military family and whose father had retired to Alençon in 1844. She became a craftswoman who made Point d’Alençon lace. Zélie had wanted to become a Sister of Charity of St Vincent de Paul but had come to recognise that her respiratory difficulties and recurrent headaches made following such a calling impossible. From the time of their betrothal, they had placed their love under the protection of God whom they recognised as ‘the first served’ in their matrimonial union.

The couple had nine children their second child, Pauline, was born in 1861 and, in 1882, she entered the Carmel in Lisieux, taking the name Sr Agnes of Jesus. Their eldest, Marie, was born in Alençon in 1860, and, in 1886, she followed her younger sister into the Lisieux Carmel, taking the name Sr Marie of the Sacred Heart. Their youngest child, Thérèse, born in 1873, later followed her two sisters into the Carmel in Lisieux, taking the name Sr Thérèse of the Holy Face and gaining worldwide fame as the Doctor of the Church, St Thérèse of Lisieux. Not long before Thérèse was born, Louis had sold his business in Alençon and had taken over the commercial side of the Alençon lace business run by his wife. Zélie taught her children to offer their hearts to the good God every morning and to accept, in advance, the difficulties they faced each day in order ‘to please Jesus.’

In December 1876, when Thérèse was three, Zélie Martin discovered that the ‘fibrous tumour’ in her breast was inoperable. Marie, Pauline and Léonie accompanied their ill mother to Lourdes the following June and Zélie died on August 28th 1877, at the age of 46. Having consulted his older daughters, Louis decided in November 1877 to move the family to Lisieux, in Normandy, in order to be near his brother-in-law, Isidore Guerin, who ran a pharmacy there. Thérèse became very attached to her father after her mother’s death, and it was through him that she first became aware of the Carmelites: “Each afternoon I went with him for a walk and made a visit to the Blessed Sacrament in one or other of the churches. It was in this way that I first saw the chapel of our Carmel: ‘Look, little Queen,’ my father said, ‘behind that grating there are holy nuns who are praying to Almighty God’ … those were supremely happy days when my dear ‘King’, as I called him, went fishing and took me with him. Sometimes I tried my hand with a small rod, but more often I preferred to sit on the grass at some little distance. My reflections would then become really deep and without knowing what meditation meant, my soul was absorbed in prayer … earth seemed a land of exile and I dreamed of heaven.”

Illness and Death of Louis

Thérèse entered the Carmel in Lisieux on April 9th 1888, at the age of 15. Her sister Marie made her final profession in that Carmel about six weeks later, on May 22nd and, about a month later, their father, Louis, went missing and was only found four days later in Le Havre, suffering from amnesia because of a cerebral arteriosclerosis. As her father’s mental health declined, Thérèse completed her postulancy, taking the same Carmelite habit as her elder sisters, Marie and Pauline, on January 10th 1889. A month after attending the first profession of Thérèse, Louis Martin, at the age of 65, was committed to the Bon-Sauveur private mental asylum in Caen, where he was to remain for over three years. When Louis left the asylum in Caen in May 1892, the lease on Les Buissonnets had expired and he went to live on the estate of his in-laws, the Guérins, at La Musse, near Evreux. He was paralyzed and had difficulty speaking and he died two years later, on July 29th 1894, at the age of 71.

The Process of Canonisation

Louis and Zélie Martin were declared venerable by Pope John Paul II on March 26th 1994 and they became the second married couple to be beatified (The first being Blesseds Luigi and Maria Quattrocchi, in 2001) when they were declared blessed on October 19th 2008. Louis and Zélie Martin were canonised by Pope Francis on October 18th, 2015. They became the first married couple to be canonised.

Prayer to Louis and Zélie Martin

today we turn to you in prayer.

By fulfilling the duties of your state in life

and practicing the evangelical virtues

as spouses and as parents,

you have modelled for us

of your unwavering trust in God

and your constant willingness to surrender

all the joys, the trials,

the sorrows and the sufferings

that filled your life

encourage us to persevere

in our daily challenges

and to remain in joy and Christian hope.