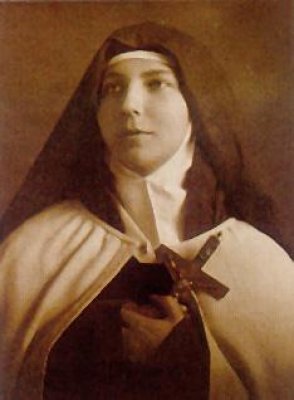 Juana Fernandez Solar was born on July 13, 1900, in Santiago, Chile. Her parents were wealthy and aristocratic and had six children.  Juana was the fourth child and was affectionately called Juanita by her family.

She excelled in school and was awarded her school’s prize for outstanding student. She enjoyed sports and had a talent for music and, after leaving school, helped orphans and the poor. She also taught catechism.

From the age of fifteen, Juanita was determined to join the Carmelite Order. She began a written correspondence with the Prioress of the Discalced Carmelite Nuns at Los Andes, who encouraged her to keep a diary. This diary, together with a number of her letters which have survived, gives a great insight into her faith and prayer life. She was much inspired by the biography of St Thérèse of Lisieux and by the writings of St Elizabeth of the Trinity, St Teresa of Avila and St John of the Cross.

At the age of 18, Juanita entered the monastery of the Discalced Carmelite Nuns at Los Andes on May 7, 1919. She was given the name of Teresa of Jesus. Unfortunately, within a year of joining the convent, she contracted Typhus. In danger of death, she was granted permission to make her final profession as a Carmelite nun. She died on April 12th 1920.

Over the years, devotion to the young woman grew. She was beatified by John Paul II on April 3, 1987, at Santiago and proposed as a model for young people. She is the first Chilean Saint and the first member of the Teresian Carmel in Latin America to be beatified.

God of mercy, joy of the saints,
you set the young heart of Blessed Teresa ablaze
with the fire of virginal love for Christ and for his Church;
and even in suffering you made her a cheerful witness to charity.
Through her intercession,
fill us with the delights of your Spirit,
so that we may proclaim by word and deed
the joyful message of your love to the world.
We ask this through Christ, our Lord.