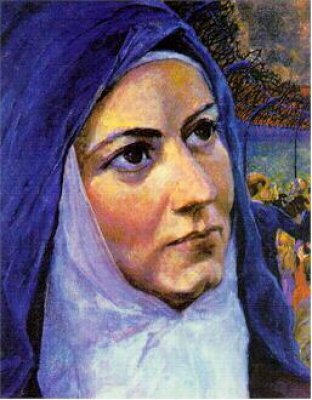 Edith Stein was born to a Jewish family at Breslau, Germany (modern-day Wrocław in Poland) on October 12th, 1891.  Edith herself tells us that, although her parents were observant in their religious practice, she lost her faith in her teens and even made a conscious decision to give up praying.  With her enquiring mind and keen intellect, Edith became a rising star on the European intellectual scene, associated with the leading philosophers of her day.  She was the student and senior research assistant of the great philosopher, Edmund Husserl.

A woman of singular intelligence and learning, she left behind a body of writing notable for its richness of insight and profound spirituality. Many of Edith’s works emphasised, above all, the dignity of the human person at a time and in a context where people would often be dehumanised on account of the Nazi regime. Through it all, though, it was the search for truth that drove her and she found it in reading the autobiography of St Teresa of Jesus (of Avila), famously declaring: ‘when I had finished the book, I said to myself: this is the truth.’ In 1922 she was baptised a Catholic and in 1933 she entered the Carmel of Cologne where she took the name Teresa Benedicta of the Cross.

During the Nazi persecution she moved to the Netherlands but was arrested there and eventually sent to Auschwitz where she died in the gas chamber on August 9th in 1942, after having offered her holocaust for the people of Israel.  Her remains were cremated soon afterwards. Her death was later recognised as martyrdom and today she is one of the six patron saints of Europe.

True to her name, St Teresa Benedicta of the Cross wrote: ‘Love is stronger than hatred.  In the end there will be only the fullness of love… If we accept the whole Christ in faithful self-giving, then he will lead us through the Passion and Cross to the glory of the resurrection.’  She was beatified by Pope John Paul II in Cologne on May 1st, 1987, and canonised in Rome twelve years later.

Prayer
Lord, God of our fathers,
you brought Saint Teresa Benedicta
to the fullness of the science of the cross
at the hour of her martyrdom.
Fill us with that same knowledge;
and, through her intercession,
allow us always to seek after you, the supreme truth,
and to remain faithful until death to the covenant of love
ratified in the blood of your Son
for the salvation of all men and women.
We ask this through Christ, our Lord.