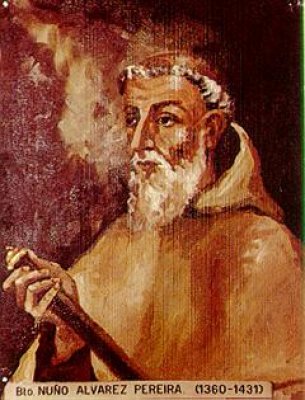 Nuno Alvares Pereira was born in Bomjardin near Lisbon in Portugal in 1360. He was raised at Court and educated in the principles of chivalry. At sixteen years old he married a rich young widow, Donna Leonar de Alvim. The couple had three children but only a daughter, Beatrice, survived into adulthood. She would marry Afonso, Duke of Braganza, son of King John of Portugal, which connects Saint Nuno with many of the royal houses of Europe.

In 1383 the King of Castile made claim to the throne of Portugal. When the Castilians  invaded Portugal in 1384 and 1385, Nuno and his soldiers defeated them at the battles of Atoleiros and Aljubarrota. King John gave him the title ‘Constable of the Kingdom’  and rewarded him with extensive lands and properties. His main castle was at Ourém, close to present day Fatima. When Donna Leonor died in 1387, Nuno chose not to remarry.

Nuno was a man of deep faith.  He prayed at home and on the field of battle. He was devoted to his family.  He cared about the wellbeing of his soldiers, encouraging them to live good lives and to receive the sacraments as often as they could.  His spirituality was rooted in devotion to the Blessed Sacrament and the Blessed Virgin Mary.

The spoils of war were of no interest to Nuno. He shared his riches with others, especially the poor. In time he would give most of his wealth to his former soldiers. He supported the Church and built many churches dedicated to the Virgin Mary, including the great Carmelite church and priory in Lisbon.

In August 1423, at the age of 63, Nuno gave up all titles and lands and entered the Carmelite Order at the church and priory which he had founded in Lisbon. He dedicated himself to the Lord, to Mary his  Patroness, and to the care of the poor. He would now be known as Brother Nuno of St Mary. Nuno had given up the ‘armour of war’ and taken up the ‘spiritual armour’ of Carmel. He took on the humble role of porter and organised the giving of food to the poor. He died on Easter Sunday, April 1st 1431.  He was immediately considered a saint by the people who called him ‘O Holy Constable’. His feast day is celebrated on November 6th.

under the  patronage of Our Lady of Mount Carmel.

Through his prayers may we too deny ourselves

and devote ourselves to you with all our hearts.

Through Christ our Lord. Amen.