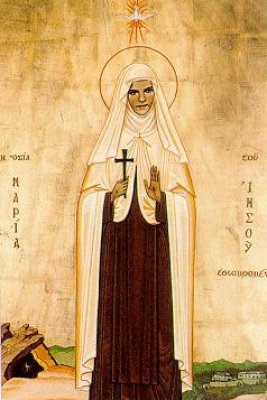 Saint Mary of Jesus Crucified was born Mariam Baouardy in 1846 at Ibillin, a village in the Holy Land, near Nazareth, to a poor family who were Catholics of the Greek Melchite Rite. At only three years of age, she and her young brother, Paul, were left as orphans on the death of her parents, George and Mariam, from an infectious illness.  The children were taken into the care of an uncle who lived at Alexandria in Egypt.

Mariam received no formal education and was unable to read for the remainder of her life.  Already aware that God was calling her to dedicate her life to him, she resolutely refused to enter into a marriage which had been arranged for her at the age of thirteen, following the custom of the time.  Over the following few years, Mariam worked as a domestic in Alexandria, Jerusalem, Beirut and finally Marseilles. Remaining in France, at the beginning of Lent in 1865, she joined the Sisters of Compassion, but falling ill, she was forced to leave after a couple of months. She subsequently was received into the Institute of the Sisters of Saint Joseph of the Apparition but, after two years as a postulant, she was judged not to be suited to the cloistered life. Finally, on June 14th 1867, she entered the Discalced Carmelites at Pau.

On August 21st 1870, while still a novice, she left for India to join a new Carmel which was being founded at Mangalore. On November 21st 1871, she made her religious profession there. One year later, she was recalled to Pau.  In 1875 she was sent to the Holy Land in order to make a new foundation, the first Carmel in Palestine.  She built a monastery in Bethlehem and began planning another in Nazareth.

During her lifetime, St Mary of Jesus Crucified was known for combining immense holiness with a sense of practicality.  She was particularly devoted to Our Lady, even as a young child.  She was regarded as having supernatural gifts and her devotion to the Holy Spirit was noteworthy. She wrote this prayer to the Holy Spirit:  ‘Holy Spirit, inspire me.  Love of God, consume me.  To the right path lead me.  Mary my mother, look down upon me.  With Jesus bless me.  From all evil, all illusion, all danger, preserve me.’  St Mary of Jesus Crucified died on August 26th 1878 at Bethlehem from cancer which she had developed after a fracture caused by a fall. She was beatified by Pope John Paul II on November 13th 1983 and was canonised on May 17th, 2015.

Prayer
God, Father of mercy and all consolation,
you raised Blessed Mary, the humble daughter of the Holy Land,
to contemplation of the mysteries of your Son
and made her witness to the love and joy of the Holy Spirit.
Grant us, through her intercession,
so to share in the sufferings of Christ
that we may rejoice in the revelation of your glory.
We ask this through Christ, our Lord.