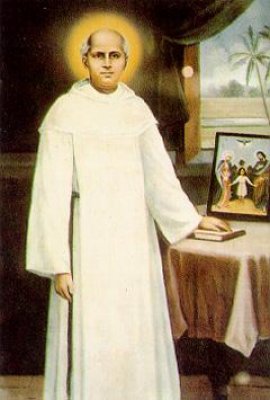 Saint Kuriakos, co-founder and first prior general of the congregation of the Carmelites of Mary Immaculate, was born at Kainakary in Kerala, India on February 10, 1805. He entered the seminary in 1818 and was ordained priest in 1829. He made his religious profession in 1855 in the congregation he had founded. In 1861 he was named vicar general for the Syro-Malabar church; in this capacity he defended ecclesial unity threatened by schism when Tomas Rochos was sent from Mesopotamia to consecrate Nestorian bishops. Throughout his life he worked for the renovation of the church in Malabar. He was also co-founder in 1866 of the congregation of the Sisters of the Mother of Carmel. Above all, he was a man of prayer, zealous for the Eucharistic Lord and devoted to the Immaculate Virgin Mary. He died at Koonammavu in 1871 and was canonized by Pope Francis in 2014.
Prayer
Lord God,
you raised up Blessed Kuriakos Elias your priest
to strengthen the unity of the Church.
Grant that through his intercession
we may be enlightened by the Holy Spirit
to read the signs of the times with wisdom
and spread the news of the Gospel
by both word and example.
We ask this through Christ our Lord.
Scripture Readings
Ephesians 4:1-7, 11-13; Gospel – Luke 10:1-9.
Texts taken from the “Carmelite Proper of the Liturgy of the Hours,” Institutum Carmelitanum, Rome: 1993.
Image courtesy of the Carmelnet webmaster, U.S.A.