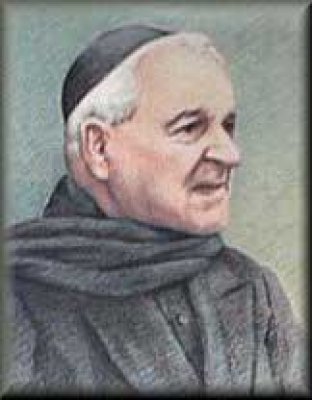 Saint George was born in Valletta, the capital of the Mediterranean island of Malta, and lived for a time in Valletta near the Sanctuary of Our Lady of Mount Carmel. As a child, and according to the customs of the times, George joined the Carmelite Family by being enrolled in the Scapular. As a young man he felt called to the priesthood. He was ordained priest on 22 December 1906.
During the early months of 1907, the young Fr George began his mission by gathering around him and forming a small group of young men in their twenties. He instilled in them moral principles, the fear of God and an awareness of the infinite love that God bears humanity. These young men were the first seeds of the Society of Christian Doctrine, popularly known as MUSEUM, the initial letters of “Magister, Utinam Sequatur Evangelium Universus Mundus” (“Lord, would that the whole world follow the Gospel”). Fr George’s work was and is the religious education of young children, boys and girls and youth, undertaken by well-prepared lay people. The central theme of his spirituality and theology was the Incarnation: “Verbum Dei caro factum est” (“The Word of God was made flesh”). These words became the motto of the distinctive emblem of the Society and of his life.
Fr George was not satisfied with a minimal Christian life. As a child he wore the scapular and in later years wanted to commit himself more intensely to following the example of Our Lady and thus became a Carmelite Tertiary. He joined the Third Order on 21 July 1918 and made his profession on 26 September of the following year. At his profession he took the name of “Franco”, after the Carmelite Blessed Franco of Siena. Fr George chose the name of this Blessed because he considered himself a great sinner… a characteristic of many saints. He really felt he was a member of the Carmelite Family, so much so that several times in his writings he calls himself a Carmelite and uses the name he took at his profession as a Tertiary rather than his own name. In 1952, in recognition of his untiring efforts to spread devotion to Our Lady of Mount Carmel, Fr George was affiliated to the Order.
He died at 82, on 26 July 1962. His presence and the influence of his spirit are still felt among all Maltese families. Fr George Preca is a saint of our times, not because of any extraordinary events recorded during his life, but above all because of the living monument that he left behind in the Society of the MUSEUM, today spread to Europe, Oceania, Africa and Latin America. Fr George has been a worthy son of Carmel, not just because he was a member of the Third Order or because he wore the Scapular and preached on Our Lady, but rather because he lived a life of intimate union with God and served his brothers and sisters after the example of Our Lady. He was beatified by John Paul II on 9 May 2001 and canonised by Benedict XVI on 3 June 2007.
Prayer
Lord,
Give to us who offer these gifts at your altar
the same spirit of love that filled Saint George.
By celebrating this sacred eucharist
with pure minds and loving hearts
may we offer a sacrifice that pleases you,
and brings salvation to us.
We ask this though Christ our Lord.