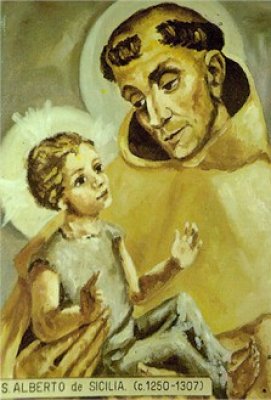 St Albert was born in Trapani, Sicily in the thirteenth century. He joined the Carmelite Order very early on in its history, during the period when it began to expand Westwards from Mount Carmel, from the Holy Land where it had begun.  Trapani was an obvious early landing place for members of the Order migrating from Palestine.  In time St Albert was attracted to join the newcomers.

Having joined the Carmelites and having been ordained a priest, he was appointed to the priory at Messina and soon became famous for his preaching and for the miracles that were worked in answer to his prayers. We know that St Albert was Provincial of Sicily in 1296 and he attended the General Chapter of the Carmelites at Bruges in 1297.  He died at his hermitage in Messina, probably in the year 1307.

St Albert typified the new kind of Carmelite that emerged as the Order adapted to life in the West.  He was a man of prayer, penance, and solitude but also a man engaged in study and in active ministry.  There were many Jewish people living in Sicily in his day and it would appear he put a lot of effort into winning them over to Christianity.  Contemporary sources attest to his having written a number of books: unfortunately none of these survive.  To this day, however, St Albert is regarded as the patron of Carmelite studies.

St Albert’s cult spread widely after his death with many cures being attributed to his intercession. The celebration of St Albert’s feast, August 7th, was introduced into the Carmelite calendar in 1411. In common with the Dominican, St Vincent Ferrer, St Albert is famous for having blessed water in his honour. A relic of the Carmelite saint is dipped in water and a prayer is recited, asking St Albert’s intercession for all who use the water, that they may gain healing in body and soul.

The Irish Carmelite, Fr John Spratt, who had lived at a priory dedicated to St Albert in Spain, brought the devotion to St Albert (and the tradition associated with St Albert’s water) back to Ireland, to the new Whitefriar Street church in Dublin, where St Albert’s Well is so popular today with people who also come to venerate the saint’s relic there.

Prayer
Lord God,
you made Saint Albert of Trapani
a model of purity and prayer,
and a devoted servant of Our Lady.
May we practise these same virtues
and so be worthy always
to share the banquet of your grace.
We ask this through Christ our Lord.