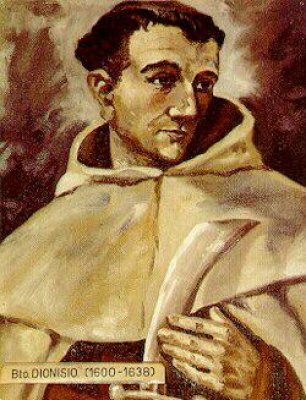 Denis of the Nativity, a priest, called in the world Pierre Berthelot, was born in Honfleur in France in 1600. He was a cartographer and naval commander for the kings of Portugal and France before he joined the Discalced Carmelites in Goa in 1635. It was also at Goa that the Portugese lay brother, Thomas Rodriguez de Cunha, born in 1598, had made his profession in 1615, taking the name Redemptus of the Cross. They were sent to the island of Sumatra, where, in the town of Achen, they received the martyr’s crown on November 29, 1638.
Prayer
Father,
we celebrate the memory
of Blesseds Denis and Redemptus
who died for their faithful witnessing to Christ.
Give us the strength to follow their example,
loyal and faithful to the end.
We ask this through Christ, our Lord.
Scripture Readings
Romans 5:1-5; Gospel – John 12:24-26.
Texts taken from the “Carmelite Proper of the Liturgy of the Hours,” Institutum Carmelitanum, Rome: 1993.
Image courtesy of the Carmelnet webmaster, U.S.A.