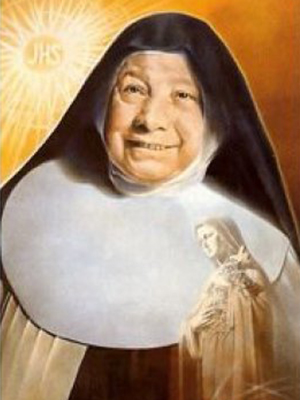 Rosa Curcio was born on 30 January 30 1877 in Noto, Sicily, the seventh child of Salvatore Curcio and Concetta Franzò. Maria only attended formal school for six years but educated herself through reading in the family library and was deeply influenced by the Life of St Teresa of Jesus, which she found at a time when she was feeling drawn to religious life.

Despite objections from her family, she joined the Carmelite Tertiaries in Ispica, Sicily, in 1890. She and several other tertiaries moved in together to see if they were ready for community life. Rosa transferred to Modica and managed the Carmela Polara which helped poor and orphaned girls. She travelled to Rome on 17 May 1925 for the canonization of St Therese of the Child Jesus.

In Porto Santa Rufina, she founded the Congregation of the Carmelite Missionary Sisters of Saint Therese of the Child Jesus, which received official recognition in 1930; its goal was “to bring souls to God” by feeding the poor, educating children and supporting families. The congregation spread out across Italy, and in 1947 she sent missionary sisters to Brazil. Since her death the congregation has subsequently spread to other parts of the world, including Canada, Tanzania, the Philippines and Romania.

Like St Therese, Rosa felt called to the missionary life but ill health meant that she could never become one. She passed the last years of her life in ill health, suffering particularly with diabetes. However, she continued to pray and give generously of herself. She died on 4 July 1957, in Porto Santa Rufina of natural causes and was beatified on 13 November 2005 by Pope Benedict XVI.

protector and redeemer of the human family,

May we be inspired by the example of Mother Maria Crocifissa Curcio,

who sought always to bring the joy of the Gospel to those most in need.

May we continue the great work which was begun in your faithful servant.