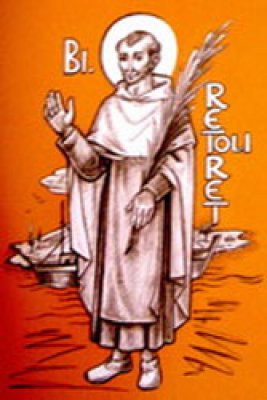 Blessed Jacques Retouret was born at Limoges in southwest-central France on 15th September 1746 into a prosperous merchant family. He was a serious young man, a lover of books, and blessed with great gifts. At the age of fifteen, he entered the Carmelite house in his home city.

Blessed Jacques’s personal holiness and his learnedness were widely appreciated.  He was also a gifted communicator with large crowds gathering to hear him preach. He was not always able to fulfil his engagements on account of the persistent bad health which afflicted him for most of his adult life.

Like so many clergy, Blessed Jacques suffered during the time of the French Revolution.  In 1790 the revolutionary authorities required priests to swear allegiance to the civil constitution in a way which would have compromised their allegiance to Rome.  Jacques Retouret was among those who refused to comply.  The authorities determined to deport him, along with many other priests and religious, from the port of Rochefort on one of two prison ships, the Deux-Associés or the Washington, both of which had previously been used to transport slaves.  Due to a blockade by the British Navy the prisoners were left onboard without adequate food, water, sanitation, or medical help.  Accordingly, many died, including Blessed Jacques, who entered eternal life on August 26th 1794 at the age of 48.  Survivors testified to his holiness and that of several others who perished.

Jacques Retouret was beatified, together with 63 other priests and religious, as martyrs for the faith, on 1st October 1995 by Pope John Paul II.

Prayer
God of power and mercy,
you gave Jacques Retouret, your martyr,
victory over pain and suffering.
Strengthen us who celebrate this day of his triumph
and help us to be victorious over the evils that threaten us.
Through Christ our Lord.