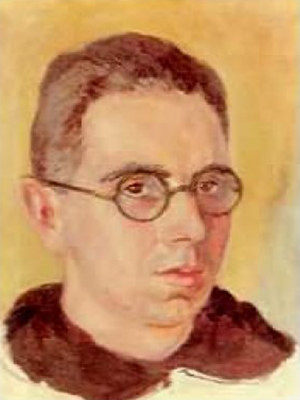 Hilary Januszewski was born on 11 June 1907 in Krajenki (Poland) and was given the name of Pawel. He received a Christian education from his parents, Martin and Marianne. He attended the college in Greblin (where his family lived from 1915), and then continued his studies at the Institute of Suchary, but had to abandon these due to his family’s economic difficulties. He took up other studies and in 1927 entered the Order of Carmel.

Hilary was ordained priest on 15 July 1934. He obtained his lectorate in theology and the prize for the best students of the Roman Academy of St Thomas and in 1935 returned to Poland to the monastery in Cracow. On his return to Poland, he was appointed professor of Dogmatic Theology and Church History at the Institute of the Polish Province in Cracow. On 1 November 1939, Fr Eliseus Sánchez‑Paredes, Provincial, appointed him prior of the community. Poland had recently been occupied by the Germans at this time. One year later, the invaders decreed the arrest of many religious and priests.

On 18 September 1940 the Gestapo deported four friars from the Carmel in Cracow. In December, when other friars were arrested, Fr Hilary decided to present himself in exchange for an older and sick friar. He was sent to the prison of Montelupi (Cracow), then to the concentration camp of Sachsenchausen and in April 1941 to the concentration camp of Dachau. There he was a model of prayer life, encouraging others and giving hope for a better tomorrow.

Together with the other Carmelites, among whom was Blessed Titus Brandsma, they often joined in prayer. When there was an outbreak of typhus in another barrack, 32 priests presented themselves to the authorities to help the sick. Fr Hilary Januszewski joined this group. He was heard to say “You know I will not come back from there, but they need us.” His apostolate lasted 21 days because, infected by typhus, he died on 25 March 1945, a few days before the liberation of the concentration camp. His body was cremated in the crematorium of Dachau.

Fr Hilary Januszewski was beatified by Pope Saint John Paul II on 13 June 1999, during his apostolic visit to Warsaw (Poland). On this occasion the Pope beatified 108 Polish martyrs of the Second World War, victims of Nazi persecution.

Prayer
All-powerful ever-living God,
you gave Blessed Hilary the courage to witness to the Gospel of Christ
even to the point of giving his life for it.
By his prayers, help us to endure all suffering for love of you
and to seek you with all our hearts,
for you alone are the source of life.
We make this prayer through Christ our Lord.