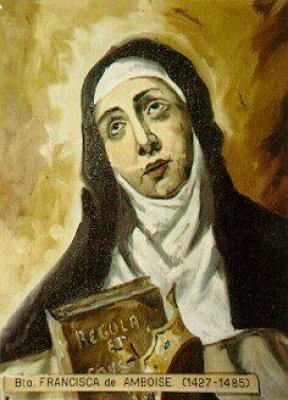 Louis d’Amboise, Prince of Talmont and Viscount of Thouars, was a rich and powerful noble in fifteenth century France. He and his wife had three daughters Péronnelle, Frances and Marguerite. However, it is Frances, born in 1427, who is remembered as the ‘blessed Duchess’ and founder of the Carmelite nuns in France.

In those days, daughters were often valuable pawns in the political wheeling and dealing of powerful nobles. Frances was one such daughter. At the age of 3 she was engaged to Peter, second son of the Duke of Brittany. They were married when Frances reached the age of 15. It was not a particularly happy union, especially in the early years. Peter is said to have been a morose individual and physically abusive towards his wife. Frances was a strong person, however, with a deep Christian faith which she brought to bear on all aspects of her life. She had a profound devotion both to the Eucharist and the Blessed Virgin Mary, a practical concern for the sick and the poor and a strong sense of justice.

With the death of his older brother in 1450, Peter became Duke of Brittany. He and Frances were crowned in the Cathedral of Rennes. Frances discreetly, but effectively, assisted her husband in the governing of his territories while always encouraging him to be just and caring towards his people. Peter died in 1457 and, as there had been no children in the marriage, the Duchy passed to his uncle.

King Louis XI of France now wanted the hand of Frances in marriage, but she resolutely refused him. She had decided to lay aside the business of state and politics and devote herself instead to God in Jesus Christ and works of charity. She had begun to think about joining religious life. Around this time, Frances made the acquaintance of the Carmelite Prior General, John Soreth, who was founding the first convents of nuns in the Order.

Frances was taken by this new venture for the Carmelite Order. With John’s support she established the first Convent of Carmelite nuns in France at Bondon, near Vannes, in 1463. The new convent was given the name ‘Three Marys’, evoking the image of the silent women at the foot of the Cross and nuns came from Liège in the Low Countries to form the community. Frances herself entered there in 1467 and received the habit from the Prior General. She insisted on no privileges because of her aristocratic background and even served for a time as infirmarian. She was elected Prioress in 1473 and put her administrative experience to good use in this role both in Bondon and in her second foundation at Nantes. Frances encouraged her sisters in their living of the Carmelite Rule and was sensitive to their spiritual and physical needs. Some of her talks to the nuns survive in manuscript. She writes:

“Whatever the troubles and difficulties that weigh you down, bear them all patiently, keep in mind that these are the things which constitute your cross. There is always something to be endured, and if you refuse one cross, be sure that you will meet with another, perhaps a heavier one. One who is never tried acquires little virtue…Through the Lord’s love nothing will be too difficult for you.”

Frances died at Nantes in 1485. She was beatified by Pope Pius IX in 1866. Some religious images show her in the Carmelite habit with a cloak of ermine to designate her former state as duchess. Her memorial is celebrated on November 5th.

to seek your kingdom in this world

by serving Jesus Christ and his Blessed Mother.

With her prayers to give us courage

help us to go forward with joyful hearts in the way of love.

We ask this through our Lord Jesus Christ.