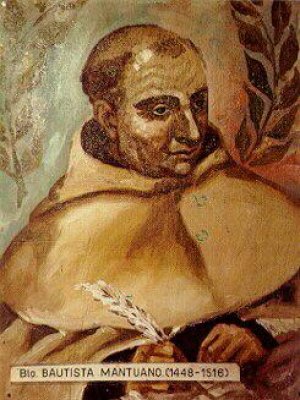 Baptist was born on 17th April 1447 to a family of civil servants to the Dukes of Mantua. He entered the Carmelites of the Congregation of Mantua at Ferrara as a young man and had a stellar rise in academics and administration of his order.
While not a poet of genius, he was a superb Latin stylist, imitating Virgil. His eclogues were used in European schools for a century and a half after his death as a model of style and he was quoted by Shakespeare, Boswell, and Nashe. He was friends with many of the leading Renaissance humanists, including the two Pico della Mirandolas, with whom some correspondence survives.
He made his religious profession in 1464 and served in many positions of responsibility in the community in addition to his literary work. Baptist performed a number of diplomatic missions for the popes; he was vicar general of his congregation six times and in 1513 he was elected Prior General of the whole Order. He was a renowned humanist who brought his richley varied poetry into the service of Christ.
He is the only Carmelite quoted in the works of William Shakespeare (Love’s Labor Lost, Act IV, scene 2, line 95ff.) He used his friendship with scholars as an opportunity of encouraging them to live a Christian life. He died in Mantua on 20th March 1516.
Prayer
Lord God,
you made Our Lady’s faithful servant,
Blessed Baptist Spagnoli,
a preacher of your Gospel by word and example.
Through his prayers may we ponder your word in Mary’s company,
and praise you with her by the way we live.
We ask this through Christ our Lord.
Scripture Readings
Wisdom:7:7-10, 15-16; Gospel – Matthew 5:13-16.
Texts taken from the “Carmelite Proper of the Liturgy of the Hours,” Institutum Carmelitanum, Rome: 1993.
Image courtesy of the Carmelnet webmaster, U.S.A.