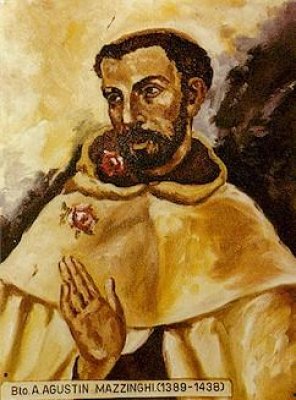 Blessed Angelus Augustine Mazzinghi was born in or around Florence towards the end of the fourteenth century.  As is so often the case with people who lived in the Middle Ages, the precise year of his birth is unknown but on the basis of later documents we know it was some time before 1386.  After his profession as a Carmelite and his ordination to the priesthood, Blessed Angelus became a teacher of theology at Florence and Frascati (near Rome).

From time to time over the long history of the Carmelite Order, reform movements begin among its friars.  They are a natural phenomenon among any group truly seeking to live according to the Gospel.  The aim of reform was to address ways in which Carmelites may have strayed from the core values expressed in their Rule.  Blessed Angelus was the first member of one such reform effort within the Order, known as the reform observance of Our Lady of the Wood.  His spirituality was all the time rooted in his devotion to Our Lady and the Eucharist.  Blessed Angelus’ personal holiness, his qualities of leadership, and his dedication to the Word of God in preaching meant he led many to renew their commitment to the Carmelite Way.

He was a renowned preacher of retreats in his day, his last taking place in 1436. Blessed Angelus was many times prior of various Carmelite communities.  He died at Florence in 1438 and was entombed at the church of Santa Maria del Carmine in the same city.  Blessed Angelus’ tomb was moved several times before being finally transferred to the high altar of the church in 1930.  After he died there was great devotion to Blessed Angelus’ memory and great appreciation of his power as an intercessor in answer to people’s prayers.  This devotion to the Carmelite friar among the people led to his beatification by Pope Clement XIII on March 7th 1761.

Prayer
Almighty and ever-living God,
you made this day holy
by welcoming Blessed Angelus Augustine Mazzinghi
into the glory of your kingdom.
Keep us true to the faith
he professed with untiring zeal,
and help us to bring it to perfection by acting in love.
We ask this through Christ, our Lord.