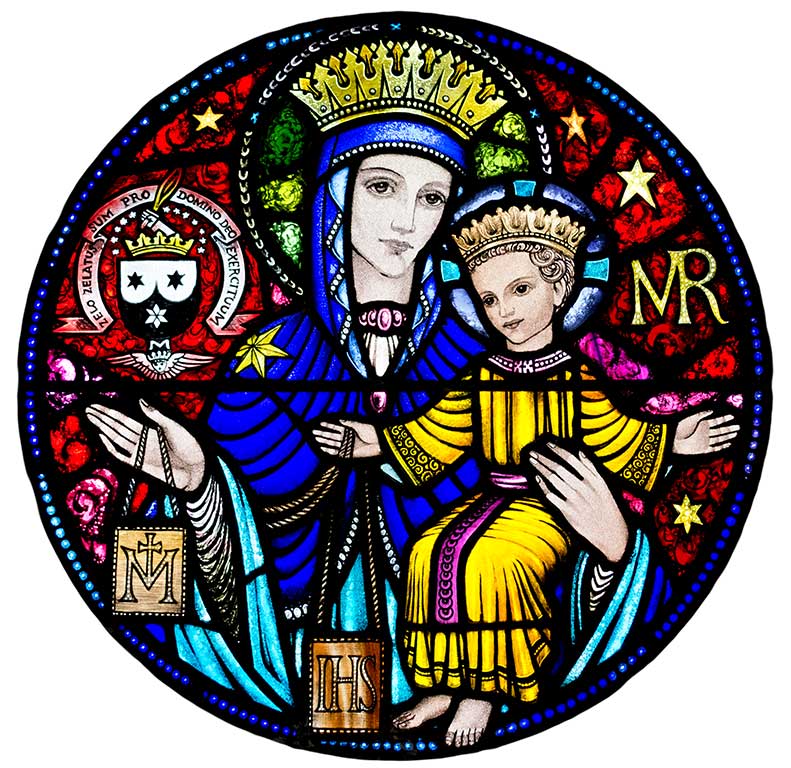 At the beginning times of the Order, the Rule specified that there be an oratory in the middle of the hermit cells; the Carmelites chose to dedicate this church to St Mary.  She thus becomes the Lady of the Place. In medieval culture this amounts to the choice of Mary as Patron: Carmelites will serve her; she will look after them.  When the Carmelites came to Europe they found there already a rich culture of devotion to Mary. Quite soon Carmelites were called ‘Brothers of the Blessed Virgin Mary of Mount Carmel.’ By the end of the 14th century the Carmelite family looked to two inspirational figures, Mary and Elijah; they were its foundational figures in the sense that all the Order sought was seen to be already incarnated in the lives of the Prophet and the Mother.

Devotion grows by reflection, prayer and study. It may be strengthened not only by saying prayers or invoking Mary’s intercession, but also by doing things in her honour. Medieval devotion emphasised simple gestures like bowing at the mention of Mary’s name, as well as processions, candles, etc. Carmelite art, like the La Bruna (The Brown Lady) image in Naples, shows a special tenderness in the depiction of Mary and her Son. A true Carmelite vision will never separate Mary from Jesus.  The highest devotion celebrates Mary in the liturgy.  We have not only the Masses of Our Lady of Mount Carmel with their rich texts and splendid prefaces, but also many feasts of Mary in the universal Church which the Carmelite Family should celebrate with particular joy.

When we survey the rich Marian tradition of Carmel, we might summarise it by saying that Mary is a gentle presence, always there with the Carmelite. Sometimes we feel her presence as Mother, at other times as Sister, Patroness or Model. One of the most common titles given to Mary in the Order is Mother and Beauty of Carmel. A vision of her beauty can always be refreshment for us in the harshness of secular society.  There are five truths about Mary in the Carmelite Order, not all equally emphasised in any particular century. 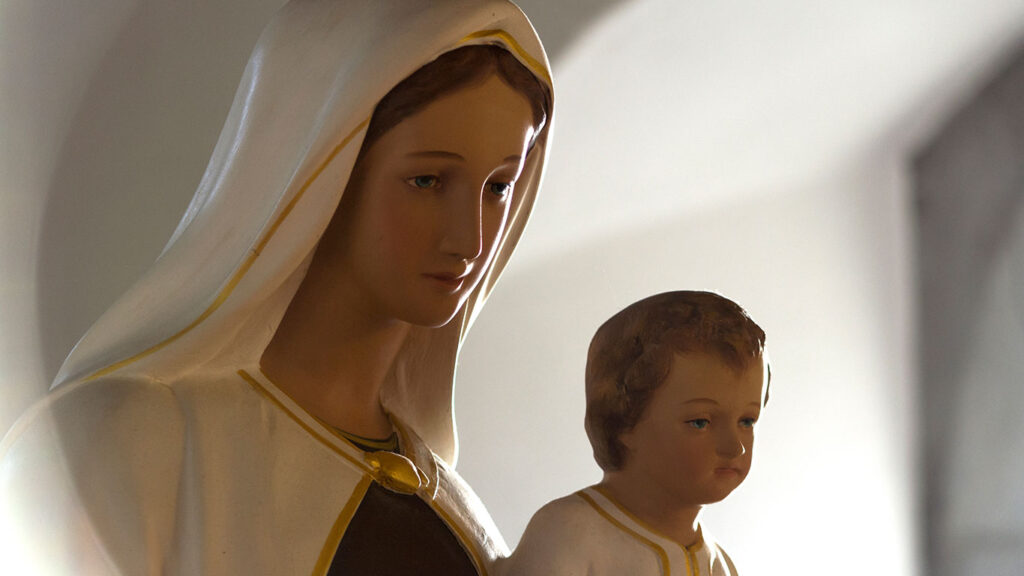 They are not exclusive to the Order, but they show its preferences in reflecting on the Mother of God: Mary is Mother. Carmelites took up this Church teaching with great enthusiasm. But they added another word, so that ‘Mother and Beauty of Carmel’ became preferred name for her.  Secondly, Mary is also seen as Patron of Carmelites.  This is a medieval concept that implies a two-way relationship between lord and servant: the lord protected his servants; they in turn looked after his interests. Such a concept fitted admirably the Carmelite vision of Mary as one whom they loved and served, and who in turn protected them.  Again, Mary is also Sister of Carmelites. The idea of Mary as Sister is found also in the first millennium, and in the papal teaching of Paul VI. When we speak of Mary as Sister, we are reminded that she too is one like us, is a daughter of Adam, and that she had to walk the same path of faith, hope and love as all people. The Carmelite idea of Mary as Sister can also have something of the idea of an elder, caring sister who looks after the rest of the family. We can look up to our Sister and accept her guidance. At different times we may be more drawn to the idea of Mary as Sister, rather than as Mother. Both are legitimate, but we should not deny the validity of a title that may not attract us at a particular time.

Fourthly, Mary is the Most Pure Virgin. This title, very common in Carmelite saints and writers, looks especially to Mary’s purity of heart. She retained God’s word in her heart (see Luke 2:19, 51) and she served him with an undivided and pure heart.  Mary is a Model for Carmelites. We can look at what she did. But we have to go deeper. It is not just a matter of doing what Mary did, but having her attitude in all our thoughts and actions.

Medieval devotion to Our Lady of Mount Carmel spread outside the friars, nuns and Third Order members, especially through the scapular. It was a reduced form of the Carmelite habit. It was a sign of affiliation to the Order, often made more public through the Arch confraternity of Our Lady of Mount Carmel. The details of its origins are far less significant than its approval by the Church over many centuries. A document of the Holy See on popular devotions (2002) has strongly commended the scapular. It noted that its use is very defuse and often independent of the life and spirituality of the Order. The Vatican document also notes: ‘It is an external sign of the filial relationship established between the Blessed Virgin Mary, Mother and Queen of Carmel, and the faithful who entrust themselves totally to her protection, who have recourse to her maternal intercession, who are mindful of the primacy of the spiritual life and the need for prayer.’ (n. 205)

All the saints of Carmel in their own ways are characterised by devotion to Mary. Carmelite mystics like St Teresa of Avila have enjoyed visions or locutions, that is, words from Mary. St Therese of Lisieux had a deep familiar relationship with the one whom she described ‘more Mother than Queen’. Bl Isidore Bakanja was a farm labourer in Belgian Congo (Zaire). An atheist employer flogged him for wearing a scapular and a rosary around his neck. He died from his wounds in 1909. Coming from a Jewish culture and being an early feminist, St Teresa Benedicta of the Cross (Edith Stein) gives us rich insights into Mary as mother and as woman.

A renewed devotion to Mary is not primarily a matter of saying more prayers to her. It implies a relationship with her, which will be established by prayer and reflected in imitation. There is a huge difference between knowing about a person, and really knowing them. Renewal in our Marian life is not a matter of prayers or information, but a loving knowing.  Such a knowing loving, or loving knowing, lies behind the idea of presence. We know that we are always in the presence of God, who sustains us, keeps us in being. But we may not be alert to this presence as we go about our daily lives. It is good to stop occasionally and reflect that we are always in God’s presence.

The gentle presence of Mary is found in her caring for all the Church, in her continuous prayer for us, ‘now and at the hour of our death’ (Hail Mary). We can become aware of her presence if we think of her now and again, speak to her, ask for her guidance, and consider how she would act in the circumstances in which we may find ourselves. We can go further and enjoy and relax in her presence.  Every age in the Church finds new insights into God’s plan unfolded in the Mother of the Son of God. The Carmelite Order also continues its own exploration of its Marian heritage.